This is where I have been this week.

After a very long time without a holiday we finally managed to get away and have the most perfectly tranquil few days that I think it is possible to have. It ticked all the boxes on my short list of boxes to tick. Nice coffee, nowhere to be, nowhen to be there, a good book, and a nice view.

We got out a little bit, but November in the north of England isn’t always the best getting-out conditions. We did manage a little walking, taking our inadequate footwear on an adventurous hill climb along steep ravines that eventually took us to our destination; a waterfall with a rainbow in it.

Here’s the water fall with the rainbow in it;

But never mind the holiday snaps, what did I read?

I read this years Booker prize winner, Lincoln in the Bardo by George Saunders. This was one of the short-listed books that I wanted to read but I didn’t get around to it until after it had won. The structure of this book is astonishing. It’s like a faux montage of historical texts, snipped and bound together to create a wider view of a short period of time during the American civil war when President Lincoln’s son died. Early on there are some lovely moments when the historical texts contradict each other a little, throwing doubt of the accuracy of any of the reports that followed. The book then seems to become a charming Shakespearian tale of the ghosts that inhabit the tomb that the president’s son has been placed in. All these elements coalesce into a story about loss and grief and letting go and moving on.

The two elements, the American civil way and the grief of losing a child (as well as the grief of losing a father) come together in some brilliant scenes where the ghosts inhabit the president and we see inside his head a little, but still with the lens of doubt about the authenticity of the reports we are given. And the way the story focuses on such a short span of time and uses that to muse on a much larger historical subject is masterful. Simultaneously small and sweeping in scope. I can’t think of another book I have read that is like this one.

And reading it in such a condensed way was lovely. It’s not often you can sit and read next to a lake for hours on end. Oh go on then, one more holiday snap. 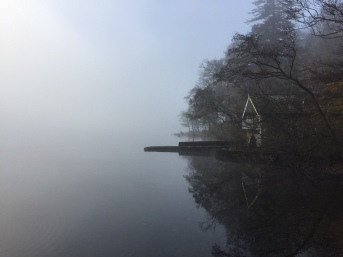