Mostly when I read what I am looking for is challenging, interesting, deep, thoughtful writing that affects and changes me by the act of reading it. But sometimes I am tired and there is only so much examination of the human condition a person can take. Sometimes you need a break, sometimes you need a little junk food, and this is my junk food of choice. 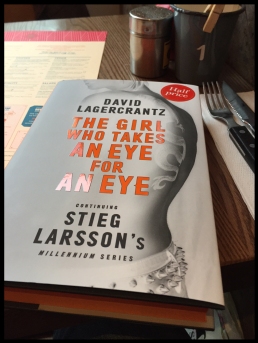 I read the first of the Millennium trilogy and thought it was merely okay, then read the second and third and got hooked on it. The first book is like a really sadistic episode of Murder She Wrote, but the rest of the series gets really good when it focuses on Salander’s history and the tangled mess she is in the middle of. I knew that Larsson had died after writing these books, but I had also heard that he had sketched out ideas for a whole series of further books. As it turns out the first three books form a complete narrative and if there had never been any more than those they would still stand alone as a finished trilogy. I was glad it was so complete, but would have loved to have had some more.

So then a couple of years later David Lagercrantz was invited to carry on the series and we do in fact get some more. I was talking to a friend of mine who had really liked the originals and I was saying that I had enjoyed the new one. He said it wasn’t anywhere near as good as the originals. And he’s right, it wasn’t. But it was good enough. Some of the fire seems to have gone out of them and they read like The Further Adventures of Lisbeth and Mikael – like high quality fan-fiction – but still, good enough.

What I hadn’t realised when reading the first of the Lagercrantz series, was how much controversy there was surrounding these books, with his partner opposing them being written at all, and his family, who inherited the estate, allowing the publisher to go ahead with more.

The posthumous wishes of writers not being honoured is an interesting subject. Ever since I heard about Max Brod completely reneging on his promise to prevent a load of Kafka’s work being released, it’s hard to read those books without a sense of transgression. Of reading something you shouldn’t be reading. It makes me feel a little naughty. But The Trial has been such a touchstone for me as a writer, such a source of inspiration and courage, that I’d be a lot poorer without it.

And then recently there was the story about Terry Pratchett’s wish to have his computer smashed with a steamroller so that the unfinished work would never be seen. His wish was carried out, and this seems entirely fair and respectful. I have some crappy half-finished stories on my hard drive that I’d rather people didn’t see. Of course reading Pratchett’s half-finished, unpublished work would be interesting for anyone that loves his books, but would it diminish him? Letting him define his own legacy seems a pretty reasonable thing to do.

But the Larsson/Lagercrantz books are a different kind of thing. Whatever these new Millennium books might be, they have almost nothing to do with what Larsson would have written had he been around to do so, and it’s worth keeping the separation between them clear. A bit like the Anthony Horowitz Sherlock Holmes books. They are good and all, but not canon. Larsson’s original Girl With the Dragon Tattoo trilogy deserves to be thought of in its own terms, and these new books are like a little extra treat for anyone that wants it. And I want it, because there aren’t many books of this type that I really enjoy and like I said, I need a break from the ongoing examination of the human condition.