Recently I have been reading Gravity’s Rainbow by Thomas Pynchon. And by recently I mean on and off over an extended period of time, but also recently as well. I often read more than one book at once and big, 900 page bricks like Gravity’s Rainbow tend to last a while. I have read eight other books since I started, and I still have a lot of it to go. 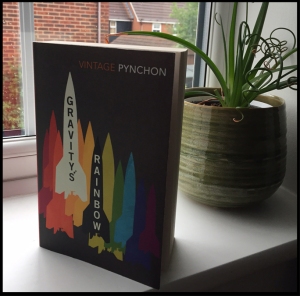 The reason I started to read it is because of a guy called Jonathan Blow. Jonathan Blow is a programmer and video game designer who has made a couple of games that I really loved. The first, Braid, came out about ten years ago, and the second, The Witness came out last year and I spent a lot of time playing it. I could go on about The Witness for ages, and occasionally do, but suffice it to say that that game has a lot of the qualities that I admire. It is interesting and intelligent, gentle and quiet. A lot of video games are these days, if you know where to look, but The Witness really struck a chord with me.

After playing The Witness I spent a lot of time watching videos on You Tube of Jonathan blow at seminars and conferences talking about game design. A lot of those videos are very specifically about game design and the games industry, but he also talks about the importance of art that is deep, interesting and difficult, because that is where the most profound effects can be had. And somewhere in those hundreds of hours of You Tube videos he mentioned Gravity’s Rainbow.

He talked about wanting to make a game that was like Gravity’s Rainbow. Not like it in the usual way we might think of, like as an adaptation. He wasn’t interesting in the setting or the plot; for want of a better word he wanted its feel. Its grandeur and its seriousness. I think this is a magnificent approach. There is an ambition to wanting to make the most challenging and serious work you can that I really admire. Sticking to your core principals and making a game (or writing a book) that by its own obsession with seriousness will likely mean some people hate it isn’t an easy decision to make.

The Witness ended up being something of a spiritual guide for the book I am trying to write. The Witness is a slow paced, quietly spoken game, and in the hours I was playing it the ideas and themes and tones that I want to capture in my writing started to emerge. And now when I am struggling to keep hold of what this book is I dip back in and remind myself of what it is I am aiming at. And when I am worrying about the ending I have planned (and I do) I remember this idea of committed seriousness and I relax a little.

6 thoughts on “Where Inspiration Comes From”