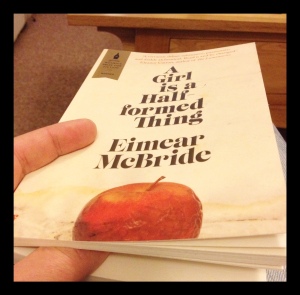 This is what I am reading at the moment. I ordered it ages ago on Amazon at the same time that I pre-ordered Colourless Tsukuru Tazaki and because I forgot to tick the box about sending the books separately ended up having to wait months to get it. Then, of course, by the time Tsukuru Tazaki arrived I pretty much threw this book out of the way to get to it. I wait long enough for new Murakami novels to hold off on them when they arrive.

I actually only bought A Girl is a Half Formed Thing because I liked the cover. I had heard it was good, but had no idea at all what it was about.  As you can see from the picture, I am only a little way into it, but it really is good. The writing style is a kind of broken, lyrical stream of consciousness, hard to read for the first couple of pages, but I found that by just letting it flow as I read it made perfect sense and has some amazing turns of phrase that could only have come from this particular style. I was listening to the Guardian books podcast and they started talking about this book, saying it has an excellent ending, at which point I stopped listening so as not to spoil it, but will go back once I have finished it to see what they had to say.

Speaking of Murakami, Tsukuru Tazaki was fantastic. I read a number of reviews on Amazon and Goodreads which were quite critical of the usual things. He does have a recurring set of tropes that crop up book after book. Some people take this as a sign of a writer regurgitating his only good ideas. I can see that point, but don’t agree with it. I want those recurring tropes, in the same way that when I watch a Wes Anderson movie I don’t want to see Kung Fu Robots or something. (For reference, I never want to see Kung Fu Robots.) The other standard criticism is to do with lack of endings. The thing is though, Tsukuru Tazaki has a proper ending. It’s just not necessarily the ending you might expect. At the risk of spoilers, though I’ll try to limit the impact, just because some books end with resolving the romantic status of its principle character that’s not necessarily the true ending of this book. This book has a definite and proper ending, it just doesn’t involve the will-they-won’t-they thing.

Also recently watched a heroic amount of Christopher Hitchens debates on youtube. I was reading a collection of his old essays and articles in a gigantic book of his from the library and discovered a huge amount of videos available. I was watching them on lunch breaks at work and while I was doing the washing up at home. He’s a fascinating guy to watch, clever, witty, controversial. I think there is a limit to how much of him you can watch though. I found the same thing with Bill Hicks, it’s brilliant stuff but both emotionally and physically draining. But if you’re the kind of person that likes to while away a lunch hour watching structured debate about the merits of religion (and who isn’t, right?) then you can’t do much better than watching him. Would also recommend his book Letters to a Young Contrarian, which is designed to be read while still young and impressionable, but is still worth a go if you are thirty-something-mumble-mumble, such as I am.