A few weeks ago I started a post about how I was nearly finished reading Moby Dick and that, since it was one of the two things on a bucket list I had been asked to write as part of an evening course I had been taking, my life was almost complete. Then, that afternoon, my wife fell seriously ill and the next three weeks disappeared in a puff of emergency rooms and hospital wards. 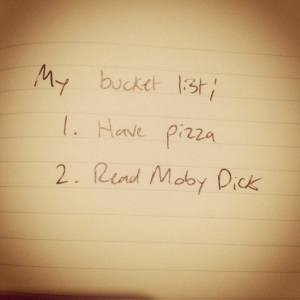 It’s obvious but everything stops when something like that happens. All the stuff that normally occupies so much time just falls away. The half-written blog posts, the pages of corrections that need to be typed up, the last few chapters of Moby Dick; it all just disappears. Suddenly there is one thing to do, and it takes up all the time available. For days all I did was get myself to and from the hospital, shop for the things that Kerry needed and wash clothes. I seemed to be on the move all the time, which sounds exhausting, only it wasn’t. I just kept doing what I needed to do and didn’t really get much of a chance to think about it.

I didn’t read or write anything for a couple of weeks apart from pages and pages in my notebook of what I was thinking and feeling and doing. I didn’t mean to write so much, Originally I was just going to write a little bit about something or other – I can’t remember what –  and instead it turned into a journal of the seven days she was in hospital.

After the first few days, once we knew what was going on and that she had started to improve, the auto-pilot I had been on seemed to switch itself off and things got really exhausting. In the seven days that she was in hospital I walked enough to burn off one full days worth of my calorie intake. (I had time enough between visiting hours to work that out.) Even once she got home it was still pretty tiring. She wanted to sleep on the couch for a while because it was the only way she could be comfortable and so I, dutiful husband that I am, slept on the floor beside the couch. You just do these things. It’s no effort when it is simply the thing you have to do.

She’s doing well now. Home and relaxing and feeling better. Things are pretty much back to normal. I finally found the time to sit and read the last three chapters of Moby Dick. It took me ages to read the first hundred and thirty odd chapters; the last three took almost a month. It reminded me of House of Leaves, by Mark Z Danielewski; a long book which, just before the end, has a chapter written in code. Just as you think you are about to finish the ending suddenly gets further away. 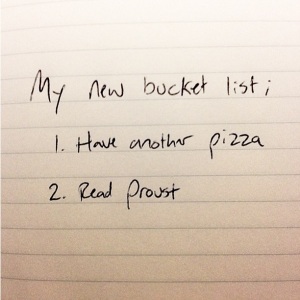 The last few weeks have demonstrated the potential problem of planning for the future. We don’t know whats waiting around the next corner. So rather than being satisfied to write things on a list, maybe it would be better to just crack on and do the things that are important to us now.