I don’t tend to re-read books very often. Sometimes I dip back in and read little bits, but not the whole book. Whenever I pick an old favourite off the shelf I end up feeling like I ought to stop and read something new. As though time is so precious and finite that there isn’t a moment to waste treading old ground and that time is better spent making my way through the great many books that deserve to be read. But recently I decided to make time to re-visit a book I haven’t read for a long time. I gave myself permission to pause the two books I am currently reading (Moby Dick and 1Q84 volume 3) and read The Virgin Suicides again, cover to cover, guilt free. 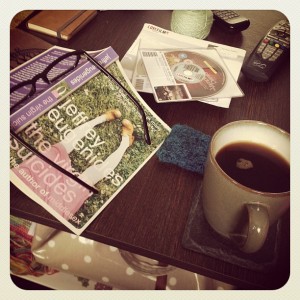 The Virgin Suicides is a special book to me. It stands like a landmark in my memory. A few weeks before I graduated in 2000 I was sitting in the college cafeteria, realising that for the first time in my life I had no where specific to go. Up to then the ending of everything had segued naturally into the beginning of the next thing. School had led to college, college to university; from where I was, I felt I could go anywhere. And the direction I decided to follow was writing. It had been a life-long ambition and then, eating my chips in the college cafe, was the moment I set myself to it.

My first attempts to write were nothing but lackluster imitations of writers I had enjoyed in the past. I had no voice of my own, every word I set down felt like a bad photocopy of someone else’s brilliance. When I read The Virgin Suicides a number of things became clear to me. One; it is ok to write the stuff you want to write. I don’t know specifically why this book made me realise this, but it did. For some reason I had assumed I was going to be a horror writer, because that was the kind of writer I wanted to be when I was young. Even though I had since lost all interest in horror, and hadn’t read a horror novel for ages, I still seemed to be trying to write horror. Two; I realised I would never write anything as complete as this.

I don’t mean that to sound self-pitying. I realised the exact same thing a second time when I re-read it. Even after a decade of improvement I doubt I could ever come close to what Eugenides achieved with The Virgin Suicides. This might sound like something that might put me off, but reading it again just reinvigorated my passion for writing. And doing some edits on my novel recently I found I was able to see a little more clearly how to fix some parts of it. This is my tip for editing writing; don’t read bad books to see how it shouldn’t be done, read something astounding to remind yourself what you are trying to achieve.

It seems inevitable that Eugenides will be remembered more for Middlesex; it won the Pulitzer after all, and is a wonderful book. But The Virgin Suicides has something special, a kind of pure simplicity. I’m probably over-egging it a bit when I say that I don’t think a single word could be added to it that wouldn’t diminish it slightly. It’s only a short book, 250 pages, but it has deceptive depth. The thing that really struck me as I was re-reading it is the way it is so open to interpretation. It seems to contradict itself constantly. One moment the suicides are selfish, the next the girls are like spiritualists whose actions defy logic. These contrary points of view are gathered up by the pluralised narrators and laid out before us as all the available evidence, and leaves conclusions well alone.

The Virgin Suicides is a beautifully sad book. If I ever need to remember what excellent writing looks like I only have to open it to a random page and be reminded instantly.