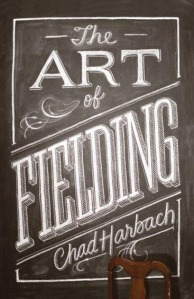 But then as I sat down to write it I felt totally ill-equipped. I don’t think I have read enough Great American Novels to justify having an opinion on the subject. I haven’t read Moby Dick yet, though I’m now pretty keen on doing so.

So anyway, The Art of Fielding. One of the things that I heard most about this book before I read it was that if you don’t have a working knowledge of baseball (which I don’t) then this novel can be pretty impenetrable. I think that statement is sort of true, but also kind of irrelevant. I don’t mind novels being about things that I don’t understand. In fact, most of the time I want them to be about things I don’t understand, against a backdrop I do. I know a bit more about baseball now than I did before reading it, but that’s hardly the point. It could be about any sport.

Henry Skrimshander, a truly astonishing short-stop, gets recruited by a college team. Things are going well until a bad throw injures his teammate. Then he loses his nerve, and is never quite the same player again. But a lot of the time this story serves as a backdrop to all the others. The story about the college presidents daughter who comes home after her marriage falls apart. The story about his teammate who is having an affair with the college president. The story about the guy who recruited Henry into the baseball team and how things are coming apart in his life.  Baseball is a prominent part of the book, but it’s far from being the most prominent.

It reminded me a lot of Jeffrey Eugenides The Marriage Plot, only with sport instead of semiotics. Young people finding themselves, sixty-year-old college presidents finding themselves too. President Affenlight, for me anyway, was the most compelling character. Like a lost kid who has suddenly opened his eyes and found himself all grown up and just as lost as ever. It’s an excellent book with some truly beautiful moments and a totally unpredictable ending. Have a go at guessing what happens toward the end. Not right at the very end, not the very last chapter. A few chapters before that. Go on, have a guess.

Whatever you just guessed, you’re wrong.

One thought on “The Art of Fielding”